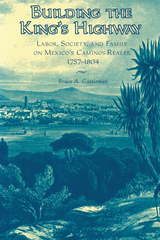 The importance of the silver trade to the Spanish colonial effort is well documented, as it opened up an exchange of goods with Europe and Asia. Lesser known is the story of the roads on which this trade moved and the people responsible for building them.

Focusing on the camino real linking Mexico City and the port of Veracruz, Bruce Castleman has written a social history of road construction laborers in late Bourbon Mexico. He has drawn on employment and census records to study a major shift in methods used by the Spanish colonial regime to mobilize the supply of unskilled labor—and concomitant changes in the identities those laborers asserted for themselves.

Through a close analysis of wages actually paid to named individuals from one week to the next, Castleman opens a new window on Mexican history. In the 1760s, a free-wage labor regime replaced a draft-labor system, and by examining records of road construction he traces both this transformation and its implications. During this time, free-wage artisans saw their earnings reduced, and they were pushed into the labor pool, and Castleman reveals how a shift occurred in the way that laborers identified themselves as the Spanish casta system of racial classification became increasingly fluid.

In his study, Castleman introduces some of the principle players of eighteenth-century Mexico, from viceroys to tobacco planters to military engineers. He then fleshes out the lives of working persons, drawing on a complete set of construction records from the construction of the Puente de Escamela at Orizaba to forge a collective biography that considers their existences apart from the workplace. By linking census and employment records, he uncovers a host of social indicators such as marriage preference, family structure, and differences over time in how the caste system was used to classify people according to ancestry.

As Castleman shows, roads did not so much link Mexico to the global economy as forge regional markets within New Spain, and his work provides an astute analysis of struggles between the Bourbon colonial state, the important consulados of Mexico City and Veracruz, and more localized interests over road policy. More important, Building the King’s Highway provides a valuable new perspective on people’s lives as it advances our understanding of labor in late colonial Latin America.

AUTHOR BIOGRAPHY
Bruce A. Castleman is a lecturer in history at San Diego State University.
TABLE OF CONTENTS