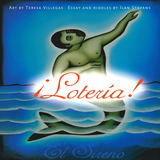 Lotería
by Teresa Villegas and Ilan Stavans
University of Arizona Press, 2004
Cloth: 978-0-8165-2353-5
A pastime, delightful—
Chips, cards, and a table.
The riddles insightful,
the future, unstable! What is it?

It's Lotería, the Mexican game of chance! For the uninitiated, it might seem like bingo played with a riddling tarot deck. But this enthralling board game is more than entertainment. The images found on its cards—La Virgen, El Pan Dulce, La Telenovela—are miniature reflections of an entire culture, capturing the joys and sorrows of the Mexican people.

Wildly popular on both sides of the border, Lotería cards originated in the Iberian peninsula in the eighteenth century but have been redesigned so many times as to defy expectation, with boards devoted to ecclesiastical figures, soccer idols, and even vaudeville starlets. With the dawn of a new millennium, American artist Teresa Villegas created a new Lotería set that is already gaining popularity in Mexico, and her striking images are also widely exhibited in galleries across the United States.

This gift book, which will bring pleasure and bewilderment to children and adults alike, reproduces more than two dozen of Villegas's 54 colorful cards, pairing them with insightful, humorous riddles written by award-winning author Ilan Stavans. Stavans also revisits his childhood in an essay that examines the role of luck in Mexican life and recreates the sort of poetry jam that often accompanies Lotería contests wherever they might take place. Delve into the emblematic pages of this marvelous volume to find your own Calavera. Let yourself unravel the paths of El Deseo and the mysteries of El Corazón. Before too long, you'll realize that luck is never truly accidental—for a turn at ¡Lotería! is always an opportunity to come face to face with El Destino.
AUTHOR BIOGRAPHY
Ilan Stavans is Lewis-Sebring Professor of Latin American and Latino Culture at Amherst College. His books include On Borrowed Words: A Memoir of Language, The Essential Ilan Stavans, and The Hispanic Condition.
TABLE OF CONTENTS