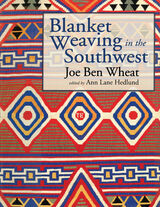 Exquisite blankets, sarapes and ponchos handwoven by southwestern peoples are admired throughout the world. Despite many popularized accounts, serious gaps have existed in our understanding of these textiles—gaps that one man devoted years of scholarly attention to address.

During much of his career, anthropologist Joe Ben Wheat (1916-1997) earned a reputation as a preeminent authority on southwestern and plains prehistory. Beginning in 1972, he turned his scientific methods and considerable talents to historical questions as well. He visited dozens of museums to study thousands of nineteenth-century textiles, oversaw chemical tests of dyes from hundreds of yarns, and sought out obscure archives to research the material and documentary basis for textile development. His goal was to establish a key for southwestern textile identification based on the traits that distinguish the Pueblo, Navajo, and Spanish American blanket weaving traditions—and thereby provide a better way of identifying and dating pieces of unknown origin.

Wheat's years of research resulted in a masterful classification scheme for southwestern textiles—and a book that establishes an essential baseline for understanding craft production. Nearly completed before Wheat's death, Blanket Weaving in the Southwest describes the evolution of southwestern textiles from the early historic period to the late nineteenth century, establishes a revised chronology for its development, and traces significant changes in materials, techniques, and designs.

Wheat first relates what Spanish observers learned about the state of native weaving in the region—a historical review that reveals the impact of new technologies and economies on a traditional craft. Subsequent chapters deal with fibers, yarns, dyes, and fabric structures—including an unprecedented examination of the nature, variety, and origins of bayeta yarns—and with tools, weaves, and finishing techniques.

A final chapter, constructed by editor Ann Hedlund from Wheat's notes, provides clues to his evolving ideas about the development of textile design. Hedlund—herself a respected textile scholar and a protégée of Wheat's—is uniquely qualified to interpret the many notes he left behind and brings her own understanding of weaving to every facet of the text. She has ensured that Wheat's research is applicable to the needs of scholars, collectors, and general readers alike. Throughout the text, Wheat discusses and evaluates the distinct traits of the three textile traditions. More than 200 photos demonstrate these features, including 191 color plates depicting a vast array of chief blankets, shoulder blankets, ponchos, sarapes, diyugi, mantas, and dresses from museum collections nationwide. In addition, dozens of line drawings demonstrate the fine points of technique concerning weaves, edge finishes, and corner tassels. Through his groundbreaking and painstaking research, Wheat created a new view of southwestern textile history that goes beyond any other book on the subject. Blanket Weaving in the Southwest addresses a host of unresolved issues in textile research and provides critical tools for resolving them. It is an essential resource for anyone who appreciates the intricacy of these outstanding creations.

AUTHOR BIOGRAPHY
Joe Ben Wheat became the first Curator of Anthropology at the University of Colorado Museum in Boulder in 1953, where he remained until retirement as Curator Emeritus in 1986. Wheat lectured widely and became known as the leading expert on southwestern textile history as well as an internationally recognized archaeologist. Segments of his work have been published in preliminary articles, but the majority of his ethnohistorical textile research has remained unpublished until now.
REVIEWS
"This thunderous book . . . will stand for a long time to come as the definitive reference and source for students, scholars, and those who simply love the vivid textiles of the Southwest. Highly recommended for both public and academic libraries." —Library Journal

"An important contribution, this book provides solid direction for solving many heretofore unresolved matters in textile history. Future textile scholars may discover new facts in time; however, this will be the benchmark from which they will work." —Shuttle, Spindle Dyepot

"It deserves to be treated the way we once reacted to good children's books: read the copy quickly and linger for minutes over each color plate. There's history, culture and pride in each one; the reader need only give himself time to discover them." —Salt Lake City Tribune

"Groundbreaking . . . Wheat and Hedlund painstakingly trace the metamorphosis of blankets from everyday wear to the highly sought-after works of are they are today. Without a doubt, Blanket Weaving in the Southwest will be accounted as the definitive history of and guide to the blanket weaving traditions of the Southwestern peoples." —Native Peoples

"A seminal publication. It establishes a new and complex view of the development of southwestern textiles that crystallizes previous studies while at the same time going beyond them. It is an invaluable resource for anyone with more than a passing interest in textiles and/or the history of the Southwest. It was worth the wait." —El Palacio

"A joy to peruse at leisure, this weighty volume will provide a fascinating reference for weavers and interested readers for years to come." —New Mexican
— -