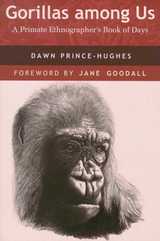 Dawn Prince-Hughes is an extraordinary researcher. She does not experiment or measure but instead sits on a wooden bench for hours each day, watching captive gorillas through the enclosure where other visitors average five-second stops. Her patience is rewarded with astounding observations—she watches gorillas make and use tools, bury a dead crow, give birth, and comfort and care for each other.

In Gorillas among Us, Prince-Hughes has compressed years of gorilla observation into a composite diary chronicling the days of one gorilla family. She creates a blended portrait of both peoples—gorilla and human. The entries capture significant observations, which often prompt brief discussions of gorillas’ captivity, diet, communication, aesthetic preferences, social behavior, and play. Several chapters end with thought-provoking meditations on human values. The final section, “More about Gorillas,” provides a concise, accessible introduction to gorilla natural history.

This book will delight and move anyone with an interest in animals, and it also makes a significant contribution to the scarce literature on captive gorillas. Prince-Hughes's observations of tool use by gorillas will interest scientists, and even a casual reader will come away with a new sense of the power of observation. The author hopes to change the way we look at animals in the wild and in captivity, and laments that zoo visitors pause so briefly in front of the gorilla enclosure, rushing on with their assumptions unchanged, without really seeing the gorillas.

By turns opinionated and descriptive, quirky and authoritative, Prince-Hughes draws us into the family life of captive gorillas and into a consideration of our own culture. Readers will learn something new about gorillas and themselves on every page of this poignant story. The book testifies to the potential for interspecies compassion and the love that one person can find in a family of gorillas.

AUTHOR BIOGRAPHY
Dawn Prince-Hughes studied captive gorillas as part of her research for a Ph.D. in interdisciplinary anthropology. She was the executive director of the Institute for Cognitive Archaeological Research and is associated with the Jane Goodall Institute. She is currently a research associate in Western Washington University’s Department of Anthropology.
REVIEWS
"An easy but well-founded introduction to all aspects of zoo gorilla life . . . Persons who are used to studying gorillas will find stories they may have experienced themselves, and that sound very familiar. On the other hand, gorilla friends who do not yet have a good idea of how gorillas live will find the book very useful." —Gorilla Journal

"Prince-Hughes' depictions of the gorilla family give us a wonderful glimpse into the lives of a few of these remarkable primates. . . . Those who choose to read Gorillas Among Us will certainly enjoy the glimpse that Prince-Hughes gives us into her experience 'bound with that of the gorilla nation.' " —American Zoo and Aquarium Association Communique

"In reading this book, it is hard not to empathize with a species often referred to as our closest relative. However scientific her observations, Prince-Hughes clearly developed a nonverbal rapport with the gorilla family, and the book has some sadness but much joy." —Booklist

"It has a potential use in a four-field Introduction to Anthropology course as a supplemental read for first-year students. In such a course, one generally has little time to devote to examining primate behavior and seldom gets into the specifics of any particular species. I can see where this brief foray into gorilla behavior would be informative, useful, and even enjoyable for the first-year student." —Journal of Anthropological Research