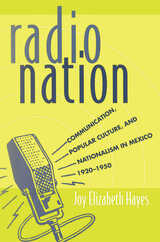 The role of mass communication in nation building has often been underestimated, particularly in the case of Mexico. Following the Revolution, the Mexican government used the new medium of radio to promote national identity and build support for the new regime. Joy Hayes now tells how an emerging country became a radio nation.

This groundbreaking book investigates the intersection of radio broadcasting and nation building. Hayes tells how both government-controlled and private radio stations produced programs of distinctly Mexican folk and popular music as a means of drawing the country's regions together and countering the influence of U.S. broadcasts.

Hayes describes how, both during and after the period of cultural revolution, Mexican radio broadcasting was shaped by the clash and collaboration of different social forces--including U.S. interests, Mexican media entrepreneurs, state institutions, and radio audiences. She traces the evolution of Mexican radio in case studies that focus on such subjects as early government broadcasting activities, the role of Mexico City media elites, the "paternal voice" of presidential addresses, and U.S. propaganda during World War II.

More than narrative history, Hayes's study provides an analytical framework for understanding the role of radio in building Mexican nationalism at a critical time in that nation's history. Radio Nation expands our appreciation of an overlooked medium that changed the course of an entire country.

AUTHOR BIOGRAPHY
Joy Elizabeth Hayes is Assistant Professor of Communication Studies at the University of Iowa.
REVIEWS
“[A] sophisticated study . . . Hayes’s compelling work offers insight into the intersection between history and national building.”—Technology and Culture

“This represents an important contribution to our understanding not only of Mexican broadcasting, specifically, but of nationalism and its relationship to state power, of media imperialism, and of the nature of radio as a medium.”—Daniel C. Hallin, author of We Keep America on Top of the World: Television Journalism and the Public Sphere— -


List of Figures
Acknoledgments
Introduction
1. Radio, Nation, and Mexican History
2. The Antimodern Trajectories of Radio and Nation
3. The Birth of Broadcasting
4. Broadcasting in the Revolution
5. Nation as Market
6. The Paternal Voice of the Nation
7. Radio at War: (Pan-)Americanism on the Air
Conclusion: Radio and Television in the Postwar Period
Notes
References
Index