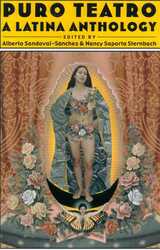 From plays produced on shoestring budgets in the 1970s to today's high-tech performance pieces, Latina theater has emerged as a vibrant art form whose time has come. This anthology showcases this dynamic new genre through the works of established playwrights such as Cherríe Moraga and Dolores Prida as well as talented new playwrights and performers who have emerged in the past decade such as Migdalia Cruz, Elaine Romero, and Monica Palacios.

Puro Teatro, A Latina Anthology includes a variety of theatrical genres: plays, performance pieces, puppet shows, innovative collaborations, and testimonials. It features previously unpublished plays from a broad range of experiences within the Latino/a community, including families and home, friends and community building, coming of age and empowerment, and sexual and ethnic identities. The editors' introduction provides a comprehensive survey of contemporary Latina theater, placing it in its theatrical context and examining its divergent roots. Puro Teatro, A Latina Anthology is the first book of its kind to reflect in print a diversified body of writing that turns the spotlight on some of America's most talented and prolific artists. A subsequent volume will complement this anthology with a theoretical, critical reading of Latina theater and performance.

CONTENTS
Full Length Plays
Botánica by Dolores Prida
Heart of the Earth: A Popul Vuh Story by Cherríe Moraga
The Fat-Free Chicana and the Snow Cap Queen by Elaine Romero

One-act Plays
Las nuevas tamaleras by Alicia Mena
And Where Was Pancho Villa When You Really Needed Him? by Silviana Wood
Fuschia by Janis Astor del Valle

Testimonials
"Battle Worn," by Laura Esparza
"Dancing with the Voice of Truth," by María Mar
"Searching for Sanctuaries: Cruising through Town in a Red Convertible," by Diane Rodríguez
"Home, Desire, Memory: There Are No Borders Here," by Caridad Svich
"Tales of a South-of-the-Border/North-of-the-Stereotype Theatre Director, by Susana Tubert
"Catching the Next Play: The Joys and Perils of Playwriting," by Edit Villarreal

Full-Length Plays, Collaborative Works
Frida: The Story of Frida Kahlo by Migdalia Cruz and Hilary Blecher
Memorias de la revolución by Carmelita Tropicana and Uzi Parnes
AUTHOR BIOGRAPHY
Alberto Sandoval-Sanchez is Professor of Spanish at Mount Holyoke College and the author of José, Can You See?: Latinos On and Off Broadway.
REVIEWS
"Successfully capturing the excitement and vitality of Latina theater." —Library Journal