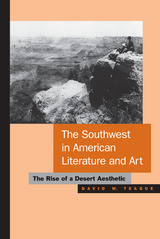 Is there a way to appreciate the desert without destroying it, a way to enjoy it without consuming it and to love it without killing it? Moreover, how can literature about the southwestern landscape affect ways in which it is either exploited or preserved? When and how did the desert change dramatically in the eyes of Anglo Americans from barren wilderness to national treasure?

By focusing on cultures that lived in the Southwest and by analyzing ways in which they described the land, David Teague persuasively argues against the destructive approach that Americans currently take to the region. Included are Native American legends and Spanish and Hispanic literature. However, the bulk of the study concentrates on Anglo American views of the Southwest, which have been generally at odds with the ecology of the deserts.

Ranging from oral traditions of the Navajo, Zuñi, and Hopi Indians to travel journals, fiction, and visual art, Teague examines the work of nearly thirty writers, artists, and explorers, including Alvar Núñez Cabeza de Vaca, Mary Austin, John Wesley Powell, and Frederic Remington. As he traces ideas about the desert over time, the author shows how American literature and art have come to represent the Southwest as a landscape to be sustained rather than transformed.

Bound to gain a prominent place in ecological criticism and in literature of the Southwest, this book offers important insights for scholars and students of literature, environmental studies, history, anthropology, and Native American studies. Its originality and vigor will also appeal to general readers with an interest in the landscape—and the future—of the American Southwest.
TABLE OF CONTENTS
Contents
List of Illustrations
Preface
Acknowledgments
1. Introduction
2. A Barren Wild
3. Imaginative Men
4. The Desert in the Magazines
5. A Desert Paradox
6. Early Voices
7. In Beauty It Is Finished
Notes
References
Index