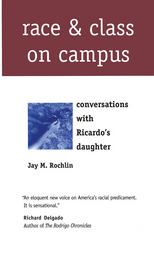 Race and Class on Campus: Conversations with Ricardo’s Daughter
by Jay M. Rochlin
University of Arizona Press, 1997
Cloth: 978-0-8165-1670-4
Racism. Is it alive and well and living on college campuses across the United States? Is it a factor in high dropout rates and other crises affecting minority college students, and if so, how? Are controversial programs of affirmative action proving to be a solution--or are they part of the problem?

Here are some insights into the hot issues sparking debate over equal opportunity and American education. In these pages, through the use of a fictional character, author Jay Rochlin presents more than forty very real African American and Mexican American men and women who struggled to earn degrees at a large, nationally recognized university in the west. Their goals, their gains, and their disappointments echo the experiences of millions of others around the country during much of the twentieth century. Perhaps most important, their true stories will provide inspiration to the many young people who wonder whether pursuing the dream of a college education is possible for them.

Readers will warm to the words of Carlos Vélez-Ibáñez, learning as a toddler from his father that the university represented toda la sabiduría del mundo,"all the wisdom in the world." Their hearts will go out to young Laura Banks, barred as a black woman from a "whites only" pool and the swimming class required for her degree in physical education. In the face of open hostility and closed doors, these students and many others persevered. When they were shunned by Anglo social clubs, they created their own. When they were assigned "back of the room" seating because of discrimination, they rose above it. And when their ultimate goal--graduation--was threatened by racism, they fought it.

Looking back, many in the book remember coming from poor families who nonetheless considered themselves middle class and, as such, simply expected their children to go to college. This family support--bolstered by the students' own drive, ambition, and sense of responsibility--seemed to be pivotal to their success. Thus the book comes out strongly on the side of critical race theorists, who emphasize individual effort as a means of combating racism and personal narratives as a way of analyzing the complex issue.

These pages are filled with the voices of everyday men and women. Their language is straightforward and from the heart. Their message is timely, in the midst of current debates over race, class, and affirmative action. And their words--for American education and for the country as a whole--carry force and meaning guaranteed to reach far into the future.
AUTHOR BIOGRAPHY
Author Jay Rochlin is the grandson of Russian Jewish immigrants. A native of Nogales, Arizona, he grew up on the U.S.-Mexico border. He has a Ph.D. in higher education and is now editor of Arizona Alumnus magazine at the University of Arizona.