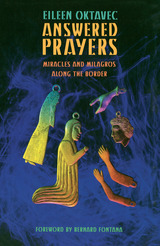 When Catholics in the Southwest ask God or a saint for help, many of them do not merely pray. They also promise or present a gift—a tiny metal object known as a milagro. A milagro, which means "miracle" in Spanish, depicts the object for which a miracle is sought, such as a crippled leg or a new house. Milagros are offered for everything people pray for, and so they can represent almost anything imaginable—arms, lungs, hearts, and eyes; men, women, and children; animals, cars, boats—even lost handbags and imprisoned men.

In Answered Prayers, the Mexicans, Mexican Americans, Tohono O'odham, and Yaquis who practice this tradition share their stories of unwavering faith and divine intervention. Anthropologist and photographer Eileen Oktavec has spent more than two decades documenting this fascinating tradition in the Arizona-Mexico borderlands. Quoting extensive interviews, she explains the beliefs of the people who perform this ancient folk ritual and the many rules guiding this practice. She also describes the many places where milagros are offered—from the elaborate Mexican baroque Mission San Xavier near Tucson, Arizona, to tiny household shrines and hospitals on both sides of the border. Oktavec also explains how milagros are made, where they are bought, and how they are used in jewelry, sculpture, and art.
AUTHOR BIOGRAPHY
Eileen Oktavec first became interested in milagros when she was a graduate student in anthropology at the University of Arizona. She lives in Goffstown, New Hampshire, and returns to Arizona each year to conduct research.
TABLE OF CONTENTS
Contents
List of Illustrations
Foreword by Bernard L. Fontana
Preface
Acknowledgments
Introduction. Milagros and the Cult of St. Francis
Chapter One. Offerings and Answered Prayers
Chapter Two. Offering Sites throughout the Somoran Region
Chapter Three. Buying a Milagro
Chapter Four. Stamping, Engraving, and Casting Milagros
Chapter Five. From Heads to Handcuffs: Many Kinds of Milagros
Chapter Six. What Becomes of Milagros?
Chapter Seven. The Milagro Art
Chapter Eight. The Future of Milagros
Appendix
Notes
Bibliography
Index