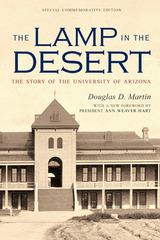 With six teachers, no books, and thirty-two students, Old Main opened its doors to the first pupils of the University of Arizona in 1891. A rugged beacon among the cacti, the campus emerged from a forty-acre donation from two gamblers and a saloonkeeper. The Lamp in the Desert is Douglas D. Martin’s history of the first seventy-five years of the University of Arizona. From early football wins by Coach McKale to the work of celebrated scholars, this is a story of the places and the people whose names are still visible reminders of the early innovators that helped to build a world-class institution.
AUTHOR BIOGRAPHY
Newsman and historian Douglas D. Martin was a born story-teller. A typesetter at fifteen and later Pulitzer prize-winning reporter, he “retired” as managing editor of the Detroit Free Press in 1945, coming west to head the University of Arizona Department of Journalism. He wrote The Lamp in the Desert from a third-floor office in the campus library overlooking Tucson.
REVIEWS
“The book has all the excitement of a November triumph in the stadium.”—The Arizona Daily Star

“A remarkable account of a remarkable institution.”—Detroit Free Press