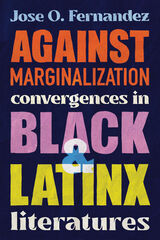 In Against Marginalization, Jose O. Fernandez examines thematic, aesthetic, historical, and cultural commonalities among post-1960s Black and Latinx writers, showing how such similarities have propelled their fight against social, cultural, and literary marginalization by engaging, adopting, and subverting elements from the larger American literary tradition. Drawing on the work of scholars in both literary traditions–including those who engage with the civil rights movements of the 1960s and 1970s–Fernandez finds intriguing points of convergence. His cross-cultural and comparative analysis puts Black and Latinx authors and literary works into the same frame as he considers the plays of Amiri Baraka and Luis Valdez, the fiction of James Baldwin and Rudolfo Anaya, the essays of Ralph Ellison and Richard Rodriguez, novels by Alice Walker and Helena María Viramontes, and the short fiction of Edward P. Jones and Junot Díaz. Against Marginalization thus uncovers points of correspondence and convergence among Black and Latinx literary and cultural legacies, interrogating how both traditions have moved from a position of literary marginalization to a moment of visibility and critical recognition.
AUTHOR BIOGRAPHY
Jose O. Fernandez is Assistant Professor in the Latina/o/x Studies Program at the University of Iowa.
REVIEWS
“Both an unparalleled resource on American literary history and a compelling look at how two seemingly distinct expressive traditions complement and converse with one another, Against Marginalization raises the bar for comparative cultural studies and unsettles demands for ethnic absolutist analyses.” — Richard T. Rodríguez, author of Next of Kin: The Family in Chicano/a Cultural Politics

Chapter 1        Convergences in Black and Latinx Literary Histories through Publishing: Beginnings to 1970s

Chapter 2        Imagining an Independent Nation: Archetypal Revolutionaries in the Theater of Amiri Baraka and Luis Valdez

Chapter 3        Fighting for One’s Country: World War II Soldiers of Color in the Fiction of James Baldwin and Rudolfo Anaya

Chapter 4        Arguing for Inclusion: Cultural Identity and the Literary Tradition in the Essays of Ralph Ellison and Richard Rodriguez

Chapter 5        Struggles in the Fields: Communities of Color in the Narratives of Alice Walker and Helena María Viramontes

Chapter 6        The Decline of the City: Naturalizing the Black and Latinx Urban Underclass in the Short Fiction of Edward P. Jones and Junot Díaz

Conclusion      Black and Latinx Writers in the Twenty-First Century: The Visibility of the Few and the Exclusion of the Many