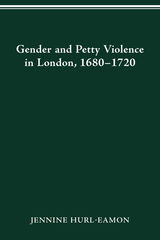 Looking at a heretofore overlooked set of archival records of London in the late 17th and early 18th centuries, Hurl-Eamon reassesses the impact of gender on petty crime and its prosecution during the period. This book offers a new approach to the growing body of work on the history of violence in past societies. By focusing upon low-cost prosecutions in minor courts, Hurl-Eamon uncovers thousands of assaults on the streets of early modern London. Previous histories stressing the masculine nature of past violence are questioned here: women perpetrated one-third of all assaults. In looking at more mundane altercations rather than the homicidal attacks studied in previous histories, the book investigates violence as a physical language, with some forms that were subject to gender constraints, but many of which were available to both men and women. Quantitative analyses of various circumstances surrounding the assaults—including initial causes, weapons used, and injuries sustained—outline the patterns of violence as a language.

Hurl-Eamon also stresses the importance of focusing on the prosecutorial voice. In bringing the court’s attention to petty attacks, thousands of early modern men and women should be seen as agents rather than victims. This view is especially interesting in the context of domestic violence, where hundreds of wives and servants prosecuted patriarchs for assault, and in the Mohock Scare of 1712, where London’s populace rose up in opposition to aristocratic violence. The discussion is informed by a detailed knowledge of assault laws and the rules governing justices of the peace.

AUTHOR BIOGRAPHY
Jennine Hurl-Eamon is assistant professor of history, Trent University.
REVIEWS
"Meticulous research in rich and underused primary sources, innovative thinking, and original conclusions make this one of the most interesting books of the year in British Studies." –Margaret Hunt, University of Massachusetts