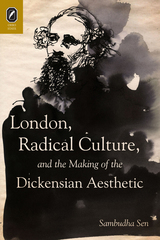 Just as his great contemporary William Makepeace Thackeray, Charles Dickens found his footing as a writer in the early-nineteenth-century market for popular print entertainment. However, even though Thackeray was a skilled caricaturist and a prolific producer of political squibs, burlesques, and ballads, he thought of novel writing as a serious literary pursuit that needed to be separated from mere “magazinery.” On the other hand, Dickens did not personally produce graphic caricatures or even the sort of squibs with which Thackeray flooded the pages of Punch, but these forms had a huge influence on his fiction.
In London, Radical Culture, and the Making of the Dickensian Aesthetic, Sambudha Sen argues that the popular novelistic aesthetic that underlay Dickens’s fiction was composed of, above all, the expressive resources that it absorbed from the nineteenth-century market for print and visual entertainment. Sen’s book aims to precisely chart the series of displacements and “reactivations” by which expressive strategies of these extraliterary discourses found their way into Dickens’s novels. Sen also examines the ways in which the expressive modes that Dickens absorbed from popular print and visual culture affected his novelistic techniques. Sen draws on some of Thackeray’s novels to illustrate how Dickens’s representation of “character” within the big city and his negotiations of the ceremonial discourses of power differ from Thackeray’s more properly literary representations.
London, Radical Culture, and the Making of the Dickensian Aesthetic breaks new ground in its elaboration of the symbiotic relationship between the Dickensian “popular novelistic aesthetic” and expressive resources that germinated in popular forms such as radical journalism, radical cartooning, city sketches, and panoramas. It is therefore likely to generate further research on the interanimation between canonical literature and popular forms.
AUTHOR BIOGRAPHY
Sambudha Sen is professor of English at University of Delhi.
REVIEWS
“This book shows us far more clearly than any before both why Dickens made so many artistic choices that have puzzled and disappointed his critics and how those choices fit into his larger aesthetic project.” —Catherine Gallagher, The Ida May and William J Eggers Jr. Chair in English, University of California, Berkeley

TABLE OF CONTENTS
Contents
List of Illustrations
Acknowledgments
Introduction
Chapter 1. Dickens, Thackeray, and “The Language of Radicalism”
Chapter 2. The Aesthetics and Politics of Caricature: Bleak House, Little Dorrit, and Vanity Fair in Relation to “Radical Expression”
Chapter 3. Re-Visioning the City: The Making of an Urban Aesthetic from Hogarth to the Stereoscope
Chapter 4. Novelizing the City: Bleak House, Vanity Fair, and the Hybridizing Challenge
Chapter 5. Radical Culture, the City, and the Problem of Selfhood: Great Expectations and Pendennis
Chapter 6. Working with Fragments: Our Mutual Friend as a Reflection on the Popular Aesthetic
Notes
Bibliography
Index