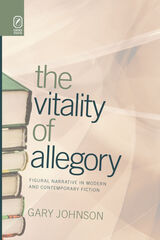 In The Vitality of Allegory Gary Johnson argues that the rumors of allegory’s death have been greatly exaggerated. Surveying the broad landscape of modern and contemporary narrative fiction, including works from Europe, Africa, and North America, Johnson demonstrates that, although wholly allegorical narratives have become relatively rare, allegory itself remains a vibrant presence in the ongoing life of the novel, a presence that can manifest itself in a variety of ways.
Working from the premise that conventional conceptions of allegory have been inadequate, Johnson takes a rhetorical approach, defining allegory as the transformation of some phenomenon into a figural narrative for some larger purpose. This reconception allows us to recognize that allegory can govern a whole narrative—and can do so strongly or weakly—or be an embedded part or a thematic subject of a narrative and that it can even be used ironically. By developing these theoretical points through careful and insightful analysis of works such as Jackson’s “The Lottery,” Orwell’s Animal Farm, Kafka’s The Metamorphosis and The Trial, Achebe’s Things Fall Apart, Roth’s American Pastoral, Mann’s Death in Venice, Coetzee’s Elizabeth Costello, and several works by John Barth, Johnson himself transforms our understanding of allegory and of the history of the modern and contemporary novel.
AUTHOR BIOGRAPHY

Gary Johnson is Dean of the College of Liberal Arts and associate professor of English at The University of Findlay.