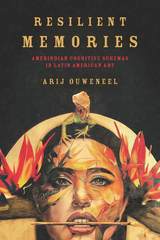 Arij Ouweneel’s Resilient Memories: Amerindian Cognitive Schemas in Latin American Art takes a cognitive approach to the mediation of collective memory by works of art. In looking at cultural production of Amerindians—the transnational mnemonic community comprised of indígenas, originarios, mestizos, and cholos—Ouweneel argues that cultural memories and identity are not simply the sum total of individuals’ expressions of self, but that some cultural artifacts become privileged to inform the heart of the mnemonic community. Ouweneel seeks to identify a series of cognitive schemas as the foundation of an Amerindian Cognitive Unconsciousness as a viable alternative to the Freudian Dynamic Unconscious. Art, then, serves to trigger the cognitive schemas embedded within the Amerindian community and act as the mediator of collective memory.

Exploring works ranging in popularity, from Alfonso Cuarón’s Y Tu Mamá También to the paintings of Peruvian artists Claudia Coca and Jorge Miyagui, and from Mexican Zapatistas to hip-hop, Ouweneel details the ways in which artists interact with the embodied memory of the community but also assert their own place within it as crucial, furthering their audiences’ understanding of and interaction with existing cultural schemas. In this way, Ouweneel shows that memories must serve the present or they will be forgotten.
AUTHOR BIOGRAPHY
Arij Ouweneel is Associate Professor in the Centre for Latin American Research and Documentation at the University of Amsterdam. He is the author of Freudian Fadeout: The Failings of Psychoanalysis in Film Criticism.

REVIEWS
“Of particular value is that the author’s approach through cognitive critical studies creates a conceptual field in which the deep memory of indigenous peoples is intertwined with the sociopolitical issues of contemporary indigenous life.” —David William Foster