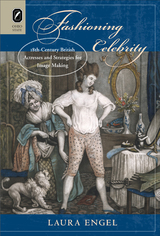 This volume takes a new approach to the study of late eighteenth-century British actresses by examining the significance of leading actresses’ autobiographical memoirs, portraits, and theatrical roles together as significant strategies for shaping their careers.

In an era when acting was considered a suspicious profession for women, eighteenth-century actresses were “celebrities” in a society obsessed with fashion, gossip, and intrigue. Fashioning Celebrity: Eighteenth-Century British Actresses and Strategies for Image Making, by Laura Engel, considers the lives and careers of four actresses: Sarah Siddons, Mary Robinson, Mary Wells, and Fanny Kemble. Using conventions of the era’s portraiture, fashion, literature, and the theater in order to create their personas on and off stage, these actresses provided a series of techniques for fashioning celebrity that still survive today.

Fashioning Celebrity suggests that eighteenth-century practices of self-promotion mirror contemporary ideas about marketing, framing, and selling the elusive self, providing a way to begin to chart a history of our contemporary obsession with fame and our preoccupation with the rise and fall of famous women.
AUTHOR BIOGRAPHY

Laura Engel is associate professor of English at Duquesne University.

“Laura Engel makes an important contribution to a growing body of scholarship on performance, both as it pertains specifically to the theatre, and as it extends to the wide variety of creative practices that shape identity off the stage as well as on. Fashioning Celebrity is a rewarding book for students and scholars in theatre studies, performance studies, eighteenth-century studies, and gender studies.”—Kristina Straub, professor of English, Carnegie Mellon University

“Where other scholarly projects in the fields of theatre history and cultural studies have explored either the pictorial images or the writings associated with each figure, the great virtue and the original contribution of Laura Engel’s study rests in its interest in demonstrating how these actresses coordinated their use of various media—theatre, portraiture, and print—to construct, enhance, or modify the contours of their celebrity.” —Lisa A. Freeman, associate professor of English, University of Illinois at Chicago