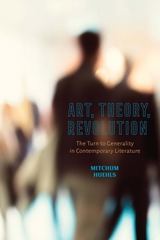 Can form be political? Do specific aesthetic and literary forms necessarily point us toward a progressive or reactionary politics? Artists, authors, and critics like to imagine so, but what happens when they lose control of the politics of their forms? In Art, Theory, Revolution: The Turn to Generality in Contemporary Literature, Mitchum Huehls argues that art’s interest in revolution did not end with the twentieth century, as some critics would have it, but rather that the relationship between literary forms and politics has been severed, resulting in a twenty-first century investment in forms of generality such as genre, gesture, constructivism, and abstraction. Focusing on three particular domains (art, theory, and revolution) in which the relationship between form and politics has collapsed, Huehls shows how twenty-first-century US fiction writers such as Chris Kraus, Percival Everett, Jonathan Safran Foer, Rachel Kushner, Salvador Plascencia, and Sheila Heti are turning to forms of generality that lead us toward a more modest, ad hoc, context-dependent way to think about the politics of form. The result is the first major study of generality in literature.
AUTHOR BIOGRAPHY
Mitchum Huehls is Associate Professor in the Department of English at UCLA. He is the author of After Critique: Twenty-First Century Fiction in a Neoliberal Age and Qualified Hope: A Postmodern Politics of Time and co-editor (with Rachel Greenwald Smith) of Neoliberalism and Contemporary Literary Culture.
REVIEWS
“With theoretical capaciousness, thematic timeliness, and rhetorical clarity, Art, Theory, Revolution makes a much-needed intervention into ongoing discussions about fictional realism, historical fiction, and political forms. In this way, Huehls promises to enliven debates about how novels possess their own political agency and contribute aesthetically to the making of theory.” —Alexandra Kingston-Reese, author of Contemporary Novelists and the Aesthetics of Twenty-First Century American Life


“Huehls captures what’s exciting and unique about recent American fiction and remains clear-sighted despite dealing with difficult concepts in aesthetic theory, deconstructive thinking, and the politics of revolution. Art, Theory, Revolution breaks new ground in how we understand cultural production after postmodernism.” —Daniel Grausam, author of On Endings: American Postmodern Fiction and the Cold War


Introduction    The End of Everything, or the Political Vacillations of Form

Coda    Mark Bradford and the Generality of Abstraction