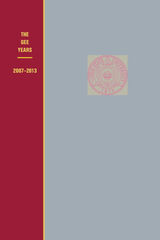 The Gee Years, 2007–2013 chronicles E. Gordon Gee’s second tenure as president of The Ohio State University and the fourteenth in the university’s history. With previous posts at Vanderbilt, Brown, Colorado, West Virginia, and a previous term at Ohio State, Gee is the longest continually serving college president in the country. His second tenure with Ohio State boasted overall fundraising at record highs, created a $100 million fund for student scholarships, called for affordability for college education for Ohioans which helped to shift study body demographics, and led the charge for restructuring the state of Ohio’s funding of higher education. Part of Gee’s close circle, Herbert B. Asher writes from firsthand experience to relate the major events, developments, and successes of the university from Gee’s recruitment through the president’s departure. The Gee Years reflects on a leader who left an indelible impression on The Ohio State University.
AUTHOR BIOGRAPHY
Herbert B. Asher is Professor Emeritus of Political Science at The Ohio State University. He worked for E. Gordon Gee in various capacities during both tenures and served in multiple Ohio State presidents’ administrations from the early 1980s through his retirement in 2015.
TABLE OF CONTENTS

Chapter 5        The Face of the University: Organizing the Calendar

Chapter 8        From Development to Advancement

Chapter 9        From Redevelopment to Revitalization: On Campus and Off

Chapter 11      Other Initiatives and Actions

Chapter 13      Ohio State by the Numbers: Trends in Quality and Performance

Chapter 16      The Changing Dimensions of Diversity at Ohio State

Chapter 18      The Ohio State University and the Gee Legacy

Appendix A    Gee’s Rules of Engagement

Appendix B     Gee and Alutto Memos to the Board of Trustees