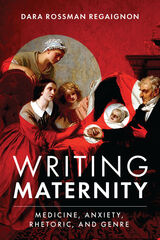 When did mothers start worrying so much? Why do they keep worrying so? Writing Maternity: Medicine, Anxiety, Rhetoric, and Genre answers these questions by identifying the nineteenth-century rhetorical origins of maternal anxiety, inviting readers to think about worrying not as something individual mothers do but as an affect that since Victorian times has defined middle-class motherhood itself. In this book, Dara Rossman Regaignon offers the first comprehensive study of child-rearing advice literature from early-nineteenth-century Britain and argues that the historical emergence of that genre catalyzed a durable shift in which maternal care was identified as maternal anxiety. Tracing the rhetorical circulation of this affect from advice literature through the memoirs of Mary Martha Sherwood (1775–1851) and Catharine Tait (1819–1878), as well as fiction by Charles Dickens, Elizabeth Gaskell, the Brontës, and Charlotte Mary Yonge, Regaignon gives maternal anxiety a literary-rhetorical history. She does this by bringing concepts such as uptake and genre ecology into literary studies from rhetorical genre theory, making a case for a mobile and culturally influential notion of genre. Examining specific case studies on child death, paid childcare, and infant doping, among others, Regaignon argues that the ideology of nurturing motherhood was predicated upon the rhetorical cultivation of maternal anxiety—which has had significant consequences for the experience of motherhood and maternal feeling.
AUTHOR BIOGRAPHY
Dara Rossman Regaignon is Associate Professor of English at New York University.
REVIEWS
“[Writing Maternity] is impressively succinct, packing a carefully nuanced study of the rhetorical effect of various literary genres (childrearing advice literature, memoir, and popular fiction) on maternal emotion in Victorian-era Britain.…Compellingly, Regaignon’s study aids in illuminating a direct connection between mothering, class, and nation-building.…It provides an important basis for thinking about the part women have played and continue to play in the development of nations (not just symbolically) and the psychological impacts of that role.” —Amber Gill, H-Net


“[An] engaging, important book … To better capture—and perhaps revise—cultural and scientific discourses, Writing Maternity shows why we should bring rhetorical studies into closer conversation with literary studies. This book is also a significant contribution to the study of maternity and care.” —Livia Arndal Woods, Review 19


“Writing Maternity offers a detailed and nuanced discussion of the cultural formation of anxious parenting in the nineteenth century. Employing rhetorical genre theory as a critical lens, Regaignon makes an exciting contribution to studies of emotion and of parenting.” —Tamara S. Wagner, author of The Victorian Baby in Print

Chapter 2        Of Mothers and Medical Men: Advice as Genre