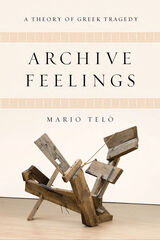 Do we take pleasure in reading ancient Greek tragedy despite the unsettling content or because of it? Does a safe aesthetic distance protect us from tragic suffering, or does the proximity to death tap into something more primal? Aristotle proposed catharsis, an emotional cleansing—or, in later interpretations, a sense of equilibrium—as tragedy’s outcome, and Sigmund Freud and Jacques Lacan, grand theorists of the forces of anti-mastery in human and nonhuman existence, surprisingly agreed. Notwithstanding this deferral to Aristotle, their theorizations of the death drive—together with Jacques Derrida’s notion of the archive as a place of conservation that inevitably fails—provide the groundwork for a radically new way of understanding tragic aesthetics.

With bold readings of thirteen plays by Aeschylus, Sophocles, and Euripides, including the Oedipus cycle, the Oresteia, Medea, and Bacchae; an eclectic synthesis of Freud, Lacan, Derrida, Žižek, Deleuze, and other critical theorists; and an engagement with art, architecture, and film, Mario Telò’s Archive Feelings: A Theory of Greek Tragedy locates Greek tragedy’s aesthetic allure beyond catharsis in a vertiginous sense of giddy suspension, in a spiral of life and death that resists equilibrium, stabilization, and all forms of normativity. In so doing, Telò forges a new model of tragic aesthetics.
AUTHOR BIOGRAPHY
Mario Telò is Professor of Classics at the University of California, Berkeley. He is author of Aristophanes and the Cloak of Comedy: Affect, Aesthetics, and the Canon.
REVIEWS
“Mario Telò’s book is one of the most astonishingly original, learned, and engaging pieces of Classical scholarship. It is truly a vanguard work on several different fronts. It is the kind of work that not only the field of Classics, but contemporary literary criticism in general, has long been waiting for.” —Damian Stocking


“Archive Feelings: A Theory of Greek Tragedy may be the most sophisticated application of postmodern paradigms to Greek tragedy to date. This original and truly bold study will appeal to the cross-set of readers who are familiar with both Greek tragedy and postmodern theory.” —Mark Padilla