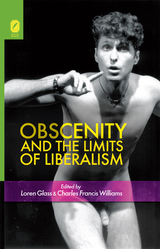 Over the course of the nineteenth century in both Europe and the United States, the state usurped the traditional authority of the church in regulating sexual expression and behavior. In the same century philosophers of classical liberalism identified that state function as a threat to individual liberty. Since then, liberalism has provided the framework for debates over obscenity around the globe.

But liberalism has recently been under siege, on the one side from postmodern thinkers skeptical about its andro- and ethnocentric assumptions, and on the other side from religious thinkers doubtful of the moral integrity of the Enlightenment project writ large.The principal challenge for those who conduct academic work in this realm is to formulate new models of research and analysis appropriate to understanding and evaluating speech in the present-day public sphere.

Toward those ends, Obscenity and the Limits of Liberalism contains a selection of essays and interventions by prominent authors and artists in a variety of disciplines and media. These writings, taken as a whole, put recent developments into historical and global contexts and chart possible futures for a debate that promises to persist well into the new millennium.

“Obscenity and the Limits of Liberalism is diverse and internationally wide-ranging, an important and innovative collection that addresses obscenity, pornography, freedom of speech, and the aesthetic/legal/philosophical conjunction of these areas in a global and digital context.” —Linda Ruth Williams, professor of film studies, University of South Hampton