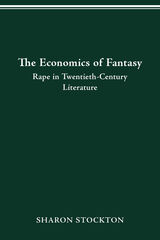 In The Economics of Fantasy: Rape in Twentieth-Century Literature, Sharon Stockton examines the persistence and the evolution of the rape narrative in twentieth-century literature—the old story of male power and violence; female passivity and penetrability. What accounts for its persistence? How has the story changed over the course of the twentieth century? In this provocative book, Stockton investigates the manner in which the female body—or to be more precise, the violation of the female body—serves as a metaphor for a complex synthesis of masculinity and political economy. From high modernism to cyberpunk, Pound to Pynchon, Stockton argues that the compulsive return to the rape story, articulates—among other things—the gradual and relentless removal of Western man from the fantastical capitalist role of venturesome, industrious agency. The metamorphosis of the twentieth-century rape narrative registers a desperate attempt to preserve traditional patterns of robust, entrepreneurial masculinity in the face of economic forms that increasingly disallow illusions of individual authority.

It is important to make clear that the genre of rape story studied here presumes a white masculine subject and a white feminine object. Stockton makes the case that the aestheticized rape narrative reveals particular things about the way white masculinity represents itself. Plotting violent sexual fantasy on the grid of economic concerns locates masculine agency in relation to an explicitly contingent material system of power, value, and order. It is in this way that The Economics of Fantasy discloses the increased desperation with which the body has been made to carry ideology under systems of advanced capitalism.
AUTHOR BIOGRAPHY
Sharon Stockton is associate professor of English at Dickinson College in Carlisle, Pennsylvania.
REVIEWS
“The Economics of Fantasy is a smart, well researched and persuasive study that presents an intelligent and provocative overview of the way in which twentieth-century rape narratives negotiate tensions associated with the construction of masculine subjectivity within the shifting forces of capitalism.”—Laura E. Tanner, author of Lost Bodies: Terminal Illness, Grief and Embodiment in Contemporary American Literature


“Stockton’s readings of the individual texts are persuasive, sensitive, incisive, and to the point. She brings a thorough understanding of this material to the forefront, and her analyses of individual works are original and thought provoking.”—Thomas DiPiero, White Men Aren’t