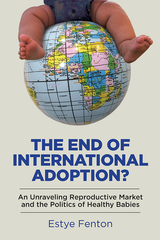 Since 2004, the number of international adoptions in the United States has declined by more than seventy percent. In The End of International Adoption? Estye Fenton studies parents in the United States who adopted internationally in the past decade during this shift. She investigates the experiences of a cohort of adoptive mothers who were forced to negotiate their desire to be parents in the context of a growing societal awareness of international adoption as a flawed reproductive marketplace. Many parents, activists, and scholars have questioned whether the inequality inherent in international adoption renders the entire system suspect. In the face of such concerns, international adoption has not only become more difficult, but also more politically and ethically fraught. The mothers interviewed for this book found themselves navigating contemporary American family life in an unexpected way, caught between the double-bind of work-family life and a new paradigm of thinking about the method—international adoption—that they used to create those families.
AUTHOR BIOGRAPHY
ESTYE FENTON is an assistant professor of sociology at the University of West Alabama in Livingston.
REVIEWS
"In The End of International Adoption, Estye Fenton brings us an eagerly awaited examination of the experiences of parents who adopted their children internationally in the last decade. This cohort of adoptive parents entered adoption during a time of both dramatically declining numbers of international placements and increasing public critique of this route to family formation. Timely and relevant, Fenton’s monograph is a welcome addition to the scholarship on international adoption and contemporary families."

— Heather Jacobson, author of Labor of Love: Gestational Surrogacy and the Work of Making Babies

“This book tells a compelling, nuanced story about the changing contemporary landscape of international adoption. A must read for anyone interested in understanding modern American family life.”
— Leslie Wang, author of Outsourced Children: Orphanage Care and Adoption in Globalizing China