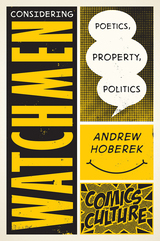 Alan Moore and Dave Gibbons’s Watchmen has been widely hailed as a landmark in the development of the graphic novel. It was not only aesthetically groundbreaking but also anticipated future developments in politics, literature, and intellectual property.

Demonstrating a keen eye for historical detail, Considering Watchmen gives readers a new appreciation of just how radical Moore and Gibbons’s blend of gritty realism and formal experimentation was back in 1986. The book also considers Watchmen’s place in the history of the comics industry, reading the graphic novel’s playful critique of superhero marketing alongside Alan Moore’s public statements about the rights to the franchise. Andrew Hoberek examines how Moore and Gibbons engaged with the emerging discourses of neoconservatism and neoliberal capitalism, ideologies that have only become more prominent in subsequent years.

Watchmen’s influences on the superhero comic and graphic novel are undeniable, but Hoberek reveals how it has also had profound effects on literature as a whole. He suggests that Watchmen not only proved that superhero comics could rise to the status of literature—it also helped to inspire a generation of writers who are redefining the boundaries of the literary, from Jonathan Lethem to Junot Díaz. Hoberek delivers insight and analysis worthy of satisfying serious readers of the genre while shedding new light on Watchmen as both an artistic accomplishment and a book of ideas.
AUTHOR BIOGRAPHY
ANDREW HOBEREK is an associate professor of English at the University of Missouri.
REVIEWS
"In his erudite and fascinating study, Hoberek reveals how Watchmen, that singularity at the heart of the comic canon, rewrote our literary categories and why its disturbing visions of Apocalyptic American Superpowers continue to haunt readers decades after it first appeared."
— Junot Díaz, author of The Brief Wondrous Life of Oscar Wao

"Assiduously researched and carefully written...Considering Watchmen should be regarded as essential reading for any critic interested in the evolution of late twentieth-century print fiction."
— Modern Language Studies

"Considering Watchmen is every conversation you’ve ever had about the legendary comic, straightened out and smartened up to the point that you rediscover its original force."
— J.D. Connor, Yale University

"Hoberek examines [Watchmen] from a variety of angles, crafting a well-written and well-argued series of interlocking theses. The focus on one work and dedication to formal discourse will appeal greatly to students of literature and philosophy as well as fans of serious deconstructions of popular culture."
— Library Journal

"Hoberek offers a scholarly approach to Alan Moore and David Gibson's Watchmen as a graphic novel, looking at elements most are aware of on an almost subconscious level. The author focuses on how Watchmen reached iconic status and on how it can be used as a touchstone for applying techniques from cultural studies, art studies, and literary studies to the emergent genre of the graphic novel. Overall, Hoberek does an outstanding job of injecting these fields, in addition to economics and history, into this slim overview of Watchmen. Detailed endnotes and a useful bibliography are the icing on the cake. Recommended."
— Choice

"This is a smart, authoritative, and nuanced book, operating at a highly sophisticated level while still remaining accessible to a wide range of readers—a true knockout punch."
— Jared Gardner, author of Projections: Comics and the History of 21st-century Storytelling

"Even a thoroughly lauded and canonized work like Watchmen rests on more or less untrampled snow, and setting foot on it takes considerable nerve. Andrew Hoberek is to be commended for taking on such a daunting task."
— Cinema Journal

“Considering Watchmen provides a series of excellent readings of its subject, a thoughtful contribution to the study of contemporary American fiction, and an admirable demonstration of the best of contemporary comics criticism.”
— Postmodern Culture

“Hoberek’s book, for its wealth of fascinating details and compelling arguments alone, is a useful starting point for anyone interested in the work of Alan Moore and comic book studies. More interesting, I think, and one of its finest contributions to the study of comics and literature, is the refreshing methodology it offers, which sets the stage for a rigorous historicization of realism and its relations both to its own tradition and to genre fiction.”
— Image TexT

“When Hoberek studies Watchmen, he does not rest in the praise of the author or in the eternal debate between the prestige category of ‘Graphic novel’ and the debased on of ‘Comic book’ ... Considering Watchmen bring[s] more perspectives to the work and thus seem[s] to confirm both the value of the originally published series and its existence as a postmodern text with multiple readings.”
— The Comics Grid