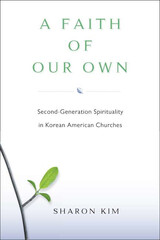 Second-generation Korean Americans, demonstrating an unparalleled entrepreneurial fervor, are establishing new churches with a goal of shaping the future of American Christianity.

A Faith of Our Own investigates the development and growth of these houses of worship, a recent and rapidly increasing phenomenon in major cities throughout the United States.

Immigration historians have depicted the second-generation as a transitional generation--on the steady march toward the inevitable decline of ethnic identity and allegiance. Sharon Kim suggests an alternative path. By harnessing religion and innovatively creating hybrid religious institutions, second-generation Korean Americans are assertively defining and shaping their own ethnic and religious futures. Rather than assimilating into mainstream American evangelical churches or inheriting the churches of their immigrant parents, second-generation pastors are creating their own hybrid third space--new autonomous churches that are shaped by multiple frames of reference.

Including data gathered over ten years at twenty-two churches, A Faith of Our Own is the most comprehensive study of this topic that addresses generational, identity, political, racial, and empowerment issues.
AUTHOR BIOGRAPHY
SHARON KIM is assistant professor of sociology at California State University, Fullerton.
REVIEWS
"Sharon Kim has written a clear, well-organized, and accessible book on an important emerging phenomenon among second generation Korean American churches."
— Contemporary Sociology

"The book offers a rich and sympathetic insight into the world of second-generation Korean American Christians. It is a must read for those interested in second-generations' religiosity in the twenty-first century."
— Sociology of Religion

"This interesting and accessible book picks up on an emergent phenomena—the creation of hybrid third spaces of worship among second-generation Korean Americans. Kim's work is a significant contribution to the study of religion and the new second-generation."
— Rebecca Y. Kim, author of God's New Whiz Kids: Korean American Evangelicals on Campus