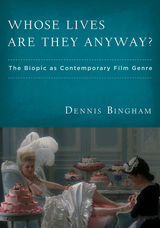 The biopic presents a profound paradox—its own conventions and historical stages of development, disintegration, investigation, parody, and revival have not gained respect in the world of film studies. That is, until now.

Whose Lives Are They Anyway? boldly proves a critical point: The biopic is a genuine, dynamic genre and an important one—it narrates, exhibits, and celebrates a subject's life and demonstrates, investigates, or questions his or her importance in the world; it illuminates the finer points of a personality; and, ultimately, it provides a medium for both artist and spectator to discover what it would be like to be that person, or a certain type of person.

Through detailed analyses and critiques of nearly twenty biopics, Dennis Bingham explores what is at their core—the urge to dramatize real life and find a version of the truth within it. The genre's charge, which dates back to the salad days of the Hollywood studio era, is to introduce the biographical subject into the pantheon of cultural mythology and, above all, to show that he or she belongs there. It means to discover what we learn about our culture from the heroes who rise and the leaders who emerge from cinematic representations.

Bingham also zooms in on distinctions between cinematic portrayals of men and women. Films about men have evolved from celebratory warts-and-all to investigatory to postmodern and parodic. At the same time, women in biopics have been burdened by myths of suffering, victimization, and failure from which they are only now being liberated.

To explore the evolution and lifecycle changes of the biopic and develop an appreciation for subgenres contained within it, there is no better source than Whose Lives Are They Anyway?

AUTHOR BIOGRAPHY
Dennis Bingham is an associate professor and director of film studies in the IU School of Liberal Arts at Indiana University Purdue University Indianapolis. He is the author of Acting Male: Masculinities in the Films of James Stewart, Jack Nicholson, and Clint Eastwood (Rutgers University Press).
REVIEWS
"Bingham offers a highly readable, erudite, multifaceted, and marvelously innovative treatment of the genre in its contemporary manifestations."
— Marcia Landy, author of Stardom Italian Style

"A charmingly written, impressively researched, consistently intelligent study of the movies' most critically neglected genre. Few film books in the past decade have given me so much pleasure and edification."
— James Naremore, author of More Than Night: Film Noir in Its Contexts

"Bingham provides an exhaustive study of the biopic. This handsome, well-illustrated, smoothly written volume is a perfect resource for survey courses and a solid read. Highly recommended."
— Choice

"The fruit of many years' labor, Whose Lives Are They Anyway? offers an intelligent and provocative reading of the biopic that will draw its readers back to the films and lives it explores."
— Film Quarterly

BOOK ONE : THE GREAT (WHITE) MAN BIOPIC AND ITS DISCONTENTS
1 Strachey's Way, or All's Well That Ends Welles
2 Rembrandt (1936)
3  Citizen Kane and the Biopic
4 Lawrence of Arabia: "But does he really deserve a place in here?"
5 Nixon, Oliver Stone, and the Unmaking of the Self-Made Man
6 Thirty Two Short Films About Glenn Gould: Ghost Picture
7 Ed Wood: The Biopic of Someone Undeserving
8 Spike Lee's Malcolm X:  Appropriation or Assimilation?
9 Raoul Peck's Lumumba: Drama, Documentary, and Postcolonial Appropriation

BOOK TWO: A WOMAN'S LIFE IS NEVER DONE: FEMALE BIOPICS
10 Prologue
11 Superstar: the Karen Carpenter Story: Toying with the Genre
12 I Want to Live!: Criminal Woman, Male Discourses
13 Barbra and Julie at the Dawning of the Age of Aquarius
~Funny Girl
~Star!
14 Hacked: Gorillas in the Mist and Other Female Biopics
15 An Angel at My Table: Re-Framing the Female Biography
16 Erin Brockovich: Hollywood Feminist Revisionism, after a Fashion
17 Twenty-First Century Women
~The Notorious Bettie Page: Free Will and God's Will
~Marie Antoinette: The Female Biopic Gets the Guillotine
18 I'm Not There: Some Conclusions on a Book Concerning Biopics