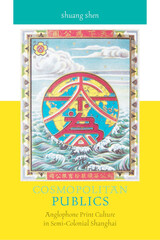 Early twentieth-century China paired the local community to the worldùa place and time when English dominated urban-centered higher and secondary education and Chinese-edited English-language magazines surfaced as a new form of translingual practice.

Cosmopolitan Publics focuses on China's "cosmopolitans" Western-educated intellectuals who returned to Shanghai in the late 1920s to publish in English and who, ultimately, became both cultural translators and citizens of the wider world. Shuang Shen highlights their work in publications such as The China Critic and T'ien Hsia, providing readers with a broader understanding of the role and function of cultural mixing, translation, and multilingualism in China's cultural modernity.

Decades later, as nationalist biases and political restrictions emerged within China, the influence of the cosmopolitans was neglected and the significance of cosmopolitan practice was underplayed. Shen's encompassing study revisits and presents the experience of Chinese modernity as far more heterogeneous, emergent, and transnational than it has been characterized until now.

AUTHOR BIOGRAPHY
Shuang Shen has been a faculty member of the City University of New York and Rutgers University, and currently teaches at Lingnan University in Hong Kong. She has published in both English- and Chinese-language journals and newspapers.
REVIEWS
"As the first of its kind, this groundbreaking book provides a rare perspective from which to view the multivalent (and multilingual) dimensions of China's search for modernity in the cultural sphere and showcases a phenomenon hitherto overlooked by Chinese cultural and literary historians."
— David Wang, Harvard University

"Shen's book is both a rich archival study and a theoretically astute analysis."
— Comparative Literature Studies