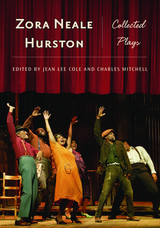 Though she died penniless and forgotten, Zora Neale Hurston is now recognized as a major figure in African American literature. Best known for her 1937 novel Their Eyes Were Watching God, she also published numerous short stories and essays, three other novels, and two books on black folklore.

Even avid readers of Hurston’s prose, however, may be surprised to know that she was also a serious and ambitious playwright throughout her career. Although several of her plays were produced during her lifetime—and some to public acclaim—they have languished in obscurity for years. Even now, most critics and historians gloss over these texts, treating them as supplementary material for understanding her novels. Yet, Hurston’s dramatic works stand on their own merits and independently of her fiction.

Now, eleven of these forgotten dramatic writings are being published together for the first time in this carefully edited and annotated volume. Filled with lively characters, vibrant images of rural and city life, biblical and folk tales, voodoo, and, most importantly, the blues, readers will discover a “real Negro theater” that embraces all the richness of black life.

AUTHOR BIOGRAPHY
Jean Lee Cole is an associate professor of English at Loyola College in Maryland and the author of The Literary Voices of Winnifred Eaton: Redefining Ethnicity and Authenticity.

Charles Mitchell is an assistant professor of theater at Loyola College and the author of Shakespeare and Public Execution.
TABLE OF CONTENTS

Appendix: Programs from The Great Day, From Sun to Sun, and All de Live Long Day
Explanatory Notes
Bibliography