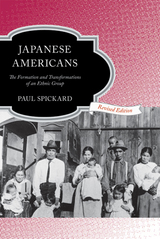 Since 1855, nearly a half a million Japanese immigrants have settled in the United States, the majority arriving between 1890 and 1924 during the great wave of immigration to Hawai'i and the mainland. Today, more than one million Americans claim Japanese ancestry. They came to study and to work, and found jobs as farm laborers, cannery workers, and railroad workers. Many settled permanently, formed communities, and sent for family members in Japan. While they worked hard, established credit associations and other networks, and repeatedly distinguished themselves as entrepreneurs, they also encountered harsh discrimination. Nowhere was this more evident than on the West coast during World War II, when virtually the entire population of Japanese Americans was forced into internment camps solely on the basis of their ethnicity.

In this concise history, Paul Spickard traces the struggles and achievements of Japanese Americans in claiming their place in American society. He outlines three forces shaping ethnic groups in general: shared interests, shared institutions, and shared culture, and chronicles the Japanese American experience within this framework, showing how these factors created and nurtured solidarity.

AUTHOR BIOGRAPHY
PAUL SPICKARD is a professor of history and Asian American studies at the University of California, Santa Barbara. He is the author of many books, including Almost All Aliens: Immigration, Race, and Colonialism in American History and Identity and coauthor of Is Lighter Better? Skin-Tone Discrimination among Asian Americans.
REVIEWS
" The book is well researched and clearly written, and it provides the reader with perhaps the best single volume on the overall historical experience of Japanese Americans."
— Robert C. Sims, Journal of American History