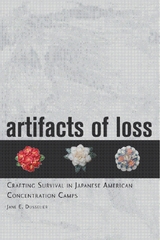 From 1942 to 1946, as America prepared for war, 120,000 people of Japanese descent were forcibly interned in harsh desert camps across the American west.

In Artifacts of Loss, Jane E. Dusselier looks at the lives of these internees through the lens of their art. These camp-made creations included flowers made with tissue paper and shells, wood carvings of pets left behind, furniture made from discarded apple crates, gardens grown next to their housingùanything to help alleviate the visual deprivation and isolation caused by their circumstances. Their crafts were also central in sustaining, re-forming, and inspiring new relationships. Creating, exhibiting, consuming, living with, and thinking about art became embedded in the everyday patterns of camp life and helped provide internees with sustenance for mental, emotional, and psychic survival.

Dusselier urges her readers to consider these often overlooked folk crafts as meaningful political statements which are significant as material forms of protest and as representations of loss. She concludes briefly with a discussion of other displaced people around the globe today and the ways in which personal and group identity is reflected in similar creative ways.

AUTHOR BIOGRAPHY
Jane E. Dusselier is an assistant professor of anthropology and Asian American studies at Iowa State University. Her previously published works include Does Food Make Place? Food Protests in Japanese American Concentration Camps.
REVIEWS
"Dusselier has given us an excellent thick description of the ways that Japanese American prisoners of both generations used arts and crafts as tools of survival. Future camp studies will have to take her work into account."
— Roger Daniels, University of Cincinnati

"This is a remarkable page-turner of a book. Beyond the usual scholarly audiences from such disciplines as history and material culture, public historians, psychologists, art therapists, and anyone interested in the intersection of art, loss, and agency will find this book a meaningful read."
— Journal of American Ethnic History