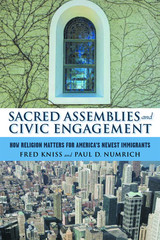 Immigration to the United States has been a major source of population growth and cultural change throughout much of America’s history. Currently, about 40 percent of the nation’s annual population growth comes from the influx of foreign-born individuals and their children. As these new voices enter America’s public conversations, they bring with them a new understanding of Buddhism, Hinduism, Islam, Judaism, and Christianity to a society that has been marked by religious variety.

Sacred Assemblies and Civic Engagement takes an in-depth look at one particular urban area—the Chicago metropolitan region—and examines how religion affects the civic engagement of the nation’s newest residents. Chapters focus on important religious factors, including sectarianism, moral authority, and moral projects; on several areas of social life, including economics, education, marriage, and language, where religion impacts civic engagement; and on how notions of citizenship and community are influenced by sacred assemblies.

AUTHOR BIOGRAPHY
Fred Kniss is an associate professor and the chair of the sociology department at Loyola University Chicago. He is the author of Disquiet in the Land: Cultural Conflict in American Mennonite Communities (Rutgers University Press).

Paul D. Numrich is the chair of the program in world religions and inter-religious dialogue at the Theological Consortium of Greater Columbus in Ohio and an affiliate research associate professor in the sociology department at Loyola University Chicago.
TABLE OF CONTENTS