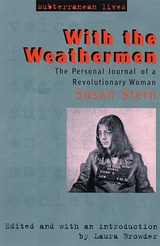 Drugs. Sex. Revolutionary violence. From its first pages, Susan Stern's memoir With the Weathermen provides a candid, first-hand look at the radical politics and the social and cultural environment of the New Left during the late 1960s.

The Weathermen--a U.S.-based, revolutionary splinter group of Students for a Democratic Society--advocated the overthrow of the government and capitalism, and toward that end, carried out a campaign of bombings, jailbreaks, and riots throughout the United States. In With the Weathermen Stern traces her involvement with this group, and her transformation from a shy, married graduate student into a go-go dancing, street-fighting "macho mama." In vivid and emotional language, she describes the attractions and difficulties of joining a collective radical group and in maintaining a position within it.

Laura Browder's masterful introduction situates Stern's memoir in its historical context, examines the circumstances of its writing and publication, and describes the book's somewhat controversial reception by the public and critics alike.