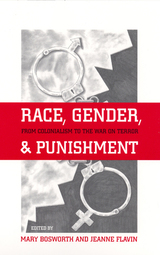 The disproportionate representation of black Americans in the U.S. criminal justice system is well documented. Far less well-documented are the entrenched systems and beliefs that shape punishment and other official forms of social control today.

In Race, Gender, and Punishment, Mary Bosworth and Jeanne Flavin bring together twelve original essays by prominent scholars to examine not only the discrimination that is evident, but also the structural and cultural forces that have influenced and continue to perpetuate the current situation. Contributors point to four major factors that have impacted public sentiment and criminal justice policy: colonialism, slavery, immigration, and globalization. In doing so they reveal how practices of punishment not only need particular ideas about race to exist, but they also legitimate them.

The essays unearth troubling evidence that testifies to the nation's brutally racist past, and to white Americans' continued fear of and suspicion about racial and ethnic minorities. The legacy of slavery on punishment is considered, but also subjects that have received far less attention such as how colonizers' notions of cultural superiority shaped penal practices, the criminalization of reproductive rights, the link between citizenship and punishment, and the global export of crime control strategies.

Uncomfortable but necessary reading, this book provides an original critique of why and how the criminal justice system has emerged as such a racist institution.
AUTHOR BIOGRAPHY
Mary Bosworth is university lecturer in criminology and fellow of Saint Cross College at the University of Oxford. Jeanne Flavin is an associate professor in the sociology and anthropology department at Fordham University in New York.
TABLE OF CONTENTS