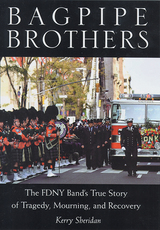 After the 9/11 World Trade Center terrorist attacks, New York City's Emerald Society Bagpipe Band of firefighter-musicians took out their instruments and prepared to bury their dead--343 brothers in duty and in blood. Many firefighters alternated between playing their instruments at funerals and digging for the missing in the rubble of Ground Zero. The Irish American tradition of funeral bagpiping became the sound of mourning for an entire nation.

Bagpipe Brothers tells the unforgettable story of four firefighters in the band, who struggled to bring peace to their families and themselves while searching for the dead, coping with the endless round of funerals, and rethinking the meaning of faith. Their experiences illustrate the grief and recovery of the nation in the aftermath of the terrorist attacks.

Kerry Sheridan has written the first book to cover the ordeal of the massive number of funerals, the importance of recovering bodies in Irish American culture, and the bagpiping ritual, both traditional and modern.

AUTHOR BIOGRAPHY
Kerry Sheridan is an editor on the Middle East desk of Agence France Presse in Cyprus. She has worked as a freelance correspondent in Cairo, Egypt, and has written for the San Francisco Chronicle and Irish American newspapers in New York and California.
TABLE OF CONTENTS