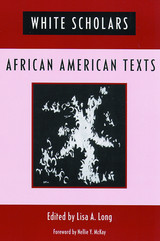 What makes someone an authority? What makes one person's knowledge more credible than another's? In the ongoing debates over racial authenticity, some attest that we can know each other's experiences simply because we are all "human," while others assume a more skeptical stance, insisting that racial differences create unbridgeable gaps in knowledge.

Bringing new perspectives to these perennial debates, the essays in this collection explore the many difficulties created by the fact that white scholars greatly outnumber black scholars in the study and teaching of African American literature. Contributors, including some of the most prominent theorists in the field as well as younger scholars, examine who is speaking, what is being spoken and what is not, and why framing African American literature in terms of an exclusive black/white racial divide is problematic and limiting.

In highlighting the "whiteness" of some African Americanists, the collection does not imply that the teaching or understanding of black literature by white scholars is definitively impossible. Indeed such work is not only possible, but imperative. Instead, the essays aim to open a much needed public conversation about the real and pressing challenges that white scholars face in this type of work, as well as the implications of how these challenges are met.

AUTHOR BIOGRAPHY
Lisa A. Long is an associate professor of English and the coordinator of the Gender & Women's Studies Program at North Central College.
TABLE OF CONTENTS