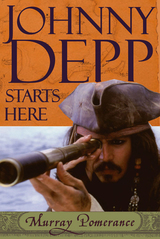 From beloved bad-boy to cool and captivating maverick, Johnny Depp has inspired media intrigue and has been the source of international acclaim since the early 1990s. He has attracted attention for his eccentric image, his accidental acting career, his beguiling good looks, and his quirky charm. In Johnny Depp Starts Here, film scholar Murray Pomerance explores our fascination with Depp, his riddling complexity, and his meaning for our culture. Moving beyond the actor's engaging and inscrutable private life, Pomerance focuses on his enigmatic screen performances from A Nightmare on Elm Street to Secret Window.

The actor's image is studied in terms of its ambiguities and its many strange nuances: Depp's ethnicity, his smoking, his tranquility, his unceasing motion, his links to the Gothic, the Beats, Simone de Beauvoir, the history of rationality, Impressionist painting, and more. In a series of treatments of his key roles, including Rafael in The Brave, Bon Bon in Before Night Falls, Jack Kerouac in The Source, and the long list of acclaimed performances from Gilbert Grape to Cap'n Jack Sparrow, we learn of Johnny onscreen in terms of male sexuality, space travel, optical experience, nineteenth-century American capitalism, Orientalism, the vulnerability of performance, the perils of sleep, comedy, the myth of the West, Scrooge McDuck, Frantois Truffaut, and more.

Johnny's face, Johnny's gaze, Johnny's aging, and Johnny's understatement are shown to be inextricably linked to our own desperate need to plumb performance, style, and screen for a grounding of reality in this ever-accelerating world of fragmentation and insecurity. Both deeply intriguing and perpetually elusive, Depp is revealed as the central screen performer of the contemporary age, the symbol of performance itself.

No thinker has meditated on Johnny Depp this way before-and surely not in a manner worthy of the object of scrutiny.
AUTHOR BIOGRAPHY

Murray Pomerance, professor and chair in the department of sociology at Ryerson University, is the author of An Eye for Hitchcock and Magia D'Amore and the editor of BAD: Infamy, Darkness, Evil, and Slime on Screen and American Cinema of the 1950s: Themes and Variations.