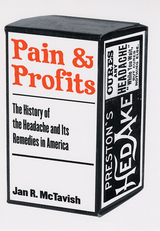 Pain and Profits tells the story of how a common ailment—the headache—became the center of a multibillion dollar pharmaceutical industry in the United States. Despite the increasing authority of the medical profession in the twentieth century, treatment of this condition has remained largely in the hands of the public. Using the headache as a case study, and advertising as a significant source of information, Jan McTavish traces the beginnings of the modern over-the-counter industry.

The American pharmaceutical industry developed from nineteenth-century suppliers of plant-derived drugs for both professional and home care. Two branches of the industry evolved over time—the ethical branch, which sold products only with prescriptions, and the nostrum branch, which was noted for its energetic marketing techniques. At the end of the century, they were joined by German companies that combined a strong commitment to science with aggressive salesmanship. Since German drugs were both highly effective in treating headaches and commonly available, sufferers wanting quick relief could easily obtain them. The result was a new kind of “legitimate” pharmaceutical industry that targeted consumers directly.

Historians of medicine as well as more general readers interested in the history of the headache will enjoy this fascinating account of the creation of the modern pharmaceutical industry.

AUTHOR BIOGRAPHY
JAN R. MCTAVISH is an assistant professor of history in the department of social sciences at Alcorn State University in Mississippi.
REVIEWS
A revealing exploration of the ways in which the linked histories of the pharmaceutical industry, government policy, and medical practice intersects with the everyday lives-and pain-of ordinary men and women. An important contribution to our understanding of an important but too often invisible aspect of modern life.
— Charles E. Rosenberg, Ernst Monrad Professor of the Social Sciences, Department of the History of Scie