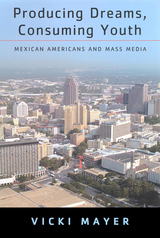 Latinos are the fastest-growing ethnic group in America and the ascendance of their popular culture has become a huge phenomenon. But beyond J. Lo and Shakira, there is a deeper story to tell about culture, class, and community identities.

Producing Dreams, Consuming Youth takes us behind the scenes in San Antonio, Texas, a major market for Mexican American popular culture. Vicki Mayer brings readers the perspectives of those who produce and consume mass media—including music, television, and newspapers. Through the voices of people ranging from Spanish-language advertising agency executives to English-speaking working-class teenagers, we see how the media brings together communities of Mexican Americans as they pursue cultural dreams, identification, and empowerment. At the heart of the book is a debate about the future of Mexican American media, and thus of the youth market. How and why do media professionals imagine ethnic youths? How do young Mexican Americans accept, negotiate, and resist these images of themselves? Producing Dreams, Consuming Youth emphasizes the paradoxes of media industries that seek to include youths of color while profiting from their creative energies.