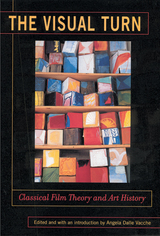 A collection of cutting-edge articles that demonstrate an implicit dialogue between art historians and film specialists.

The Visual Turn is a cutting-edge dialogue between art historians and film theorists from the silent period to the aftermath of World War II. Its aim is to broaden the horizons of film studies, while making students of art history more comfortable when they approach the key texts of classical film theory.

Through pairings of articles, The Visual Turn demonstrates that an implicit dialogue between art historians and film specialists has enriched both fields for decades. By combining original essays, reprints, and translations from French and Italian, The Visual Turn makes this little-known dialogue between two disciplines speak about such rich issues as: iconophobia, iconophilia, and iconoclasm; haptic and optical images; cognitivism and aesthetics; visual form, history, and technology.

AUTHOR BIOGRAPHY
Angela Dalle Vacche teaches film studies in the School of Literature, Communication, and Culture at Ivan Allen College of the Georgia Institute of Technology. She is the author of The Body in the Mirror: Shapes of History in Italian Cinema and Cinema and Painting: How Art is Used in Film.
TABLE OF CONTENTS