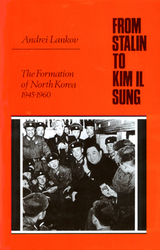 To understand how North Korea has survived as the worlds last Stalinist regime despite international isolationand at enormous human costs to its peopleone must look at how its political system was created. The countrys foundations were laid in the late 1940s and 1950s as a result of interaction between the Soviet Stalinist model, imposed from outside, and local traditions.

Andrei Lankov traces the formation of the North Korean state and the early years of Kim Il Sungs rule, when the future "Great Leader" and his entourage were consolidating their power base. Surveying the situation in North Korea after 1945, Lankov explores the internal composition of the ruling elite, the role of the Soviets, and the uneasy relations between various political groups. He also focuses on how in 1956 Kim Il Sung defeated the only known attempt to oust him and thereby established absolute personal rule beyond either Soviet or Chinese control.

The book is based on previously secret Soviet documents from Russian archives, as well as interviews with Russian and Korean participants.