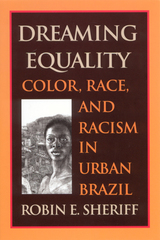 In the 1933 publication The Masters and the Slaves, Brazilian scholar and novelist Gilberto Freyre challenged the racist ideas of his day by defending the “African contribution” to Brazil’s culture. In so doing, he proposed that Brazil was relatively free of most forms of racial prejudice and could best be understood as a “racial democracy.” Over time this view has grown into the popular myth that racism in Brazil is very mild or nonexistent.

This myth contrasts starkly with the realities of a pernicious racial inequality that permeates every aspect of Brazilian life. To study the grip of this myth on African Brazilians’ views of themselves and their nation, Robin E. Sheriff spent twenty months in a primarily black shantytown in Rio de Janeiro, studying the inhabitants’s views of race and racism. How, she asks, do poor African Brazilians experience and interpret racism in a country where its very existence tends to be publicly denied? How is racism talked about privately in the family and publicly in the community—or is it talked about at all?

Sheriff’s analysis is particularly important because most Brazilians live in urban settings, and her examination of their views of race and racism sheds light on common but underarticulated racial attitudes. This book is the first to demonstrate that urban African Brazilians do not subscribe to the racial democracy myth and recognize racism as a central factor shaping their lives.
AUTHOR BIOGRAPHY
Robin E. Sheriff is an assistant professor of anthropology at Florida International University.