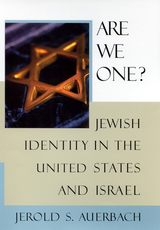 What binds together Jews of Israel and the United States? Amid the hope and frustration generated by the Middle East peace process, the meaning of Jewish statehood is more vigorously contested than ever before. A secular democratic Israel, responsive to Western liberal values, is prepared to make peace with the Palestinians by sacrificing its own historic homeland. But a covenantal Israel, which draws its Jewish identity from divine promise and the biblical narrative, refuses to surrender to modern imperatives. As the very nature of Jewish statehood has become ever more polarized, American Jewish life has been profoundly affected by this fateful Zionist contradiction.

In Are We One? Jerold S. Auerbach presents a surprising new interpretation of this contemporary Jewish dilemma. The modern Jewish impulse to embrace Western values, he writes, exacts a terrible price. He offers a critical reassessment of Zionism, a challenging analysis of the sources of the identification of American Jews with Israel—and a gloomy prognosis of the future of Jewish life, both in Israel and the United States.

In a ringing indictment that is sure to spark controversy, he states that the eagerness of secular Israelis to import American culture reflects their sweeping rejection of Jewish and Zionist values. Indeed, the diminishing number of Israelis who actually remain faithful to Jewish religious and historical imperatives are denigrated as fundamentalist zealots by Israeli and American Jews alike. Present-day Israel now exhibits such Jewish self-loathing, he states, that it has depleted its own ability to inspire world Jewry.

In a groundbreaking book that draws upon original historical analysis and extensive personal experience in Israel, Auerbach invites readers to consider the debilitating consequences of an adulterated Jewish identity in Israel and in the United States for the very future of Judaism.

AUTHOR BIOGRAPHY
Jerold S. Auerbach is a professor of history at Wellesley College. His books on Jewish subjects include Jacob's Voices and Rabbis and Lawyers. Professor Auerbach has been a Guggenheim Fellow and Fulbright Lecturer at Tel Aviv University.