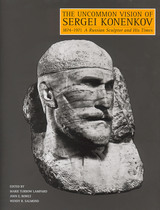 Sergei Konenkov was one of this century's most distinguished Russian artists. A celebrated sculptor, he was a leading figure of the young Soviet art establishment in the early 1920s. After spending over twenty years in the United States, he returned to the Soviet Union in 1945 to become a respected member of the Soviet art world. The mentor to an entire generation of Soviet sculptors, he was renowned for his personal charisma and artistic versatility. This collection of essays, interviews, and personal reminiscences is the first appraisal of his work and life published outside of Russia.

The contributors view Konenkov’s work within a variety of cultural, artistic, and philosophical contexts. With particular attention to his awareness of both indigenous Russian traditions and European innovations, they trace the many stages of his artistic development as he explored and experimented with techniques borrowed from Realism, Symbolism, salon portraiture, African wood carving, Socialist Realism, and Surrealism. The many different historical sources that inspired Konenkov’s artistic expression, from Orthodox Christianity and the folklore of the Russian peasantry to the Egyptian pyramids and pre-classical antiquity are also discussed. The contributors also explore the relationship of Konenkov's life and ideology to art, and the effects of expatriation on creativity.

Illustrated with dozens of photographs of Konenkov’s art, this study of one of the most enigmatic and fascinating artists of the modern period will accompany an exhibition at The Jane Voorhees Zimmerli Art Museum.

AUTHOR BIOGRAPHY
Marie Turbow Lampard is an independent scholar living in New York City. John E. Bowlt is professor of Slavic Studies at the University of Southern California, where he is also director of the Institute of Modern Russian Culture. Wendy R. Salmond is an associate professor of art history at Chapman University.