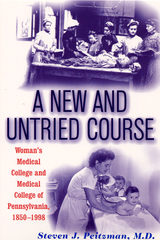 In 1850, a group of reformist male Quaker physicians and allies founded the Female Medical College of Pennsylvania to offer formal medical training to women. By the 1890s, the renamed Woman's Medical College of Pennsylvania (WMC) had matured into a solid and progressive institution that would outlast other, younger women's medical schools that had arisen in the United States. Steven J. Peitzman describes how WMC survived periods of instability and crises as it became a remarkable experiment in single-sex professional education, and a rare early example of female-male collaboration in science and medicine. Its unique survival provided scarce opportunities for women physicians and scientists to teach and perform research, while maintaining the assurance of medical education free from gender discrimination, Yielding to complex forces, it became the coeducational Medical College of Pennsylvania in 1970 and found another new course to pursue
AUTHOR BIOGRAPHY
Steven J. Peitzman, M.D. is a professor of medicine and former archives historian at MCP Hahnemann School of Medicine.