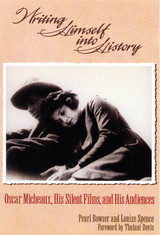 Writing Himself Into History is an eagerly anticipated analysis of the career and artistry surrounding the legendary Black filmmaker Oscar Micheaux. With the exception of Spike Lee, Micheaux is the most famous—and prolific—African American film director. Between 1918 and 1948 he made more than 40 “race pictures,” movies made for and about African Americans. A man of immense creativity, he also wrote seven novels.

Pearl Bowser and Louise Spence concentrate here on the first decade of Micheaux’s career, when Micheaux produced and directed more than twenty silent features and built a reputation as a controversial and maverick entrepreneur. Placing his work firmly within his social and cultural milieu, they also examine Micheaeux’s family and life. The authors provide a close textual analysis of his surviving films (including The Symbol of the Unconquered, Within Our Gates, and Body and Soul), and highlight the rivalry between studios, dilemmas of assimilation versus separatism, gender issues, and class. In Search of Oscar Micheaux also analyzes Micheaux’s career as a novelist in relation to his work as a filmmaker.

This is a much-awaited book that is especially timely as interest in Micheaux’s work increases.

AUTHOR BIOGRAPHY
Pearl Bowser, founder of the African Diaspora Images collection, specializes in African and African American film. She co-directed the award-winning documentaryMidnight Ramble: Oscar Micheaux and the Story of Race Movies. Louise Spence is an associate professor and coordinator of media studies at Sacred Heart University in Connecticut and has published extensively in scholarly journals and anthologies.Thulani Davis is a writer, author of the novels Maker of Saints and 1959 and contributor to Malcolm X: The Great Photographs and the biographical film W.E.B. Du Bois.