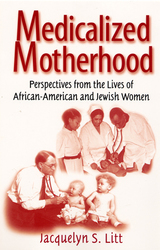 The 1946 publication of Dr. Benjamin Spock's Baby and Child Care signaled the pervasive influence of expert 'medicalized motherhood' in mid-twentieth-century America. Throughout the previous two decades, pediatricians and women's magazines alike advised mothers of the importance of physicians' guidance for the everyday care of their children, and Spock's book popularized this advice, particularly among white, middle-class women.

When Jacquelyn S. Litt interviewed African-American and Jewish women who raised their children in the 1930s and 1940s, she found that these women responded to experts' advice in ways uniquely shaped by their ethnicity, race, and class. For middle-class African-American and Jewish women, medicalization took place in ethnically/racially segregated networks and functioned as a collectively held strategy for social advance as much as a set of technical practices for raising healthy children. For poor, single African-American mothers, everyday networks offered limited access to medical institutions or mainstream norms. Medical discourse was largely controlled by white women and men, which left these women disempowered in medical institutions and marginal to dominant definitions of acceptable mothering.

Litt's book is enriched with many narratives from the mothers themselves. Both the women's voices and her acute sociological research bring to light how medicalized motherhood, while not the single cause of difference and inequality among the women, was a site where they were produced.