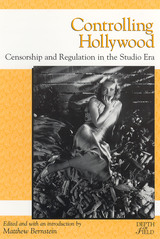 For every movie shown on the big screen, there exists a behind-the-scene story of regulation and control. What social factors determine which movies get made and shown? What is censored? And how have the standards of what is considered taboo changed over time?

Controlling Hollywood features ten innovative and accessible essays that examine some of the major turning points, crises, and contradictions affecting the making and showing of Hollywood movies from the 1910s through the early 1970s. The articles included here examine landmark legal cases; various self-regulating agencies and systems in the film industry (from the National Board of Review to the ratings system); and, external to Hollywood, the religious and social interest groups and government bodies that took a strong interest in film entertainment over the decades.

AUTHOR BIOGRAPHY
Matthew Bernstein teaches film studies at Emory University. He is the author of Walter Wanger, Hollywood Independent and co-editor of Visions of the East: Orientalism in Film (Rutgers University Press). His reviews and essays have appeared in major film studies journals.