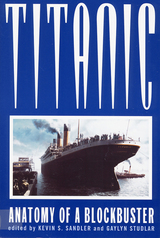 On April 14, 1912, the Titanic struck an iceberg off Newfoundland. Taking more than 1,500 souls with her, Titanic sunk on what was intended to be the glorious maiden voyage of the biggest, most expensive, and most technologically advanced ship ever built.

In 1997, James Cameron’s Titanic, the most expensive and technologically advanced movie ever made, hit theaters. In 13 weeks, it became the highest-grossing film in North America, and shortly thereafter, the first motion picture to earn a billion dollars worldwide.

The cultural studies and film scholars who have contributed 13 essays to this collection ask the key question—Why? What made Titanic such a popular movie? Why has this film become a cultural and film phenomenon? What makes it so fascinating to the film-going public?

The articles address everything from the nostalgia evoked by the film to the semiotic meaningfulness created around “The Heart of the Ocean” diamond that figures so prominently as a symbol in the film. Contributors address questions of the representations of class, sexuality, and gender; analyze the cross-cultural reception of the film in nationally specific contexts; examine the impact of strategies for marketing the film through music; and  cover the implications of the budget toward the film’s success. Finally, the contributors address the film’s multi-faceted relationship to genre, history, stardom, and contemporary social and economic means.