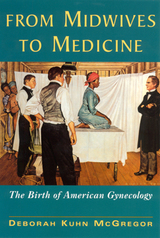 From Midwives to Medicine examines the development of modern medical treatment of women and the related history of women's health in the mid-1800s. McGregor looks not only at the medical figures who devised and practiced the innovative therapist, but also at the history of the patient experience in the development and the professionalization of a medical specialty. In exploring the controversial career of J. Marion Sims, "the father of gynecology," and the history of the Woman's Hospital of the State of New York, McGregor chronicles the emergence of a practice involving previously untried medical techniques and the use of experimentation on patients according to a social hierarchy based on race and sex.

Using patient records and archival material from the female governors and administrators at the hospital, From Midwives to Medicine shows how a new medical practice developed out of the changing patterns and historical experiences of childbirth, as well as out of the context of the social relations f the sexes. Sim's patients were slave women in the antebellum South, poor Irish immigrants in the industrial North, and upper-class white. Protestant, Manhattan socialites who sought help for their "hysterical" symptoms. During his career, which began in the South and flourished at the Women's Hospital in New York. Sims performed and perfected his technique to "cure" vesico-vaginal fistulas, the tears of childbirth, from which so many women suffered. But Sims achieved these successes on the operating table only after years of practicing his "silver suture" technique on unanesthetized slave women, who he believed "by the nature of their race... had a specific physiological tolerance for pain unknown to whites."
AUTHOR BIOGRAPHY
McGregor is an associate professor of history and women's studies at the University of Illinois at Springfield.