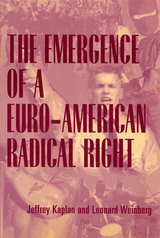 The United States and Western Europe are experiencing a new and important cultural and political development: the appearance of a right wing extremist movement that crosses the Atlantic Ocean and transcends national boundaries with as much ease as do e-mail messages on the Internet. In this book, Jeffrey Kaplan and Leonard Weinberg argue that there now exists a set of conditions common to the United States and Western Europe that draws right wing radicals on both sides of the Atlantic closer together.  These conditions, based on demographic pressures, social dislocation, economic changes, and technological advances, have set the stage for the formation of a new Euro-American radical right movement whose motives and characteristics differ from the right wing groups of the early twentieth century.

During the first thirty years of this century, radical right wing ideas and material support flowed primarily from Europe to the United States. In recent years, the inspiration for the movement has tended to flow in the opposite direction, with the establishment of various American-based groups, like the Ku Klux Klan and the White Aryan Resistance, on European soil.  Kaplan and Weinberg contend that unlike their predecessors contemporary Western right wing groups develop a common identity based more on racial solidarity than on national identity.  To support their argument, the authors provide a history of extreme right wing activity in the West and a comprehensive, detailed overview of major figures, groups, and characteristics that comprise the Euro-American radical right.  They discuss the role of the Internet in facilitating the transatlantic community and offer personal, inside accounts of people involved in the various movements.